I have to admit. I was hesitant to start watching this show – i don’t like Lee Seung Gi that much, i have never watched Oh Yeon Seo and i don’t like her mean looking face. I do love Cha Seung Won but lately his overacting comedic style is not as funny anymore. However, I was intrigued by the story, the trailer and I heard that the show is getting high ratings and..it’s a Hong Sisters drama. Thus, I stopped watching Black (which was getting boring and confusing) and started to watch this show. And I’m glad I did! 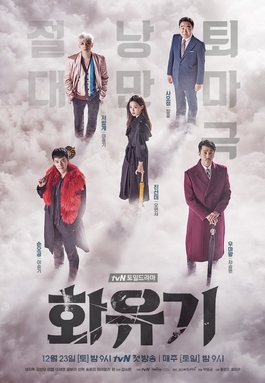 Plot
Son O-Gong and Woo Hwi (Devil King) are in conflict with each other and they look for a true light in a dark world where evils exists everywhere. Both meet Jeon Seon Mi, who became a Samjang as punishment after releasing O-Gong from the Marble Mountains because of an errand that Woo Hwi asked of Seon Mi.

First impressions – episodes 1-2
I love that the show just went straight to the present story and didn’t dwell too much on the past. The history on how they met and a little of Seon Mi’s past was enough to understand what happened but not too much to waste tv time. The first episode I wasn’t too sure about the adult Seon Mi – i preferred the young Seon Mi who was brave and sweet. The adult Seon Mi always has a sour look on her face and her ugly ponytail isn’t helping. I’m surprised that her yellow umbrella is still working even after 25 years! That must be magic! I’m curious who made her Samjang and her knowing that she is a Samjang – I wonder how she will be able to harness her power (does she have one?) to fight the evil spirits. For now she seems to be really weak and she gets bitten a lot – I’m surprised with the amount of blood she has shed in two episodes why she does not collapse and does not have scars. Maybe her wound heals? I’m not sure. I hope they explain more about being a Samjang in the next few episodes.

I dont particularly like Son O-Gong. I can’t decide if he’s a jerk or a nice guy. or maybe he is just too full of himself and hasn’t made a person or spirit that can tame him. I’m also getting mixed signals on his character – he wants to eat Samjang/Seon Mi but he keeps helping her out. On the other hand, Seon Mi says he is angry at him but feels so touched and grateful everytime he helps her out – either she is infatuated at him or she really needs more friends.

I love Devil King for now more than O-gong. He has more control of his power, he seems to be more strategic. But i also dont know if he is the bad guy or not. He has to protect Seon Mi too (reason I still am not sure) but he seems to hate O-gong (i also dont know why). Is this supposed to be a love triangle between the 3 of them or is this more of a O-Gong vs Devil King for deity?

Another thing is the hierarchy – i dont know who is higher, who that guy in white is, and who the cellphone chairman is. of course it’s only episode 2 so im sure these will all be explained later on.

I still dont feel like this is a Hong Sisters show – the usual cheeky dialogues are references are not there. but their trademark catchphrase seems to be “You passed” (the one that is being uttered by Devil King. Also, what’s the point of the Superstar show – is it just a sideplot or is Devil King recruiting people for his main plan?

I love like the mini story arcs in every episode. the first episode featured the wooden puppets – dang, the bride puppet was hella scary. imagine if that was chasing me at home i would probably scream. second episode we have the bride stealing spirit – this was pretty interesting as they were able to go inside the picture to the realm. but how come Seon Mi went inside the picture but the other bride was just sick?

by end of episode 2, Seon Mi has kissed O-gong, O-gong got trapped in the picture and Seon Mi was able to help him by slashing her own palm, luring the evil spirits then calling out O-gong’s name, who was able to escape the picture. another big HOW.

I wonder what O-gong will do once he finds out it was Devil King who almost trapped him in the picture. Also, i’m curious what their relationship is. If they are enemies, why have they lived together for years and why does Devil King want O-gong out of the way?

Can’t wait for the next episodes!