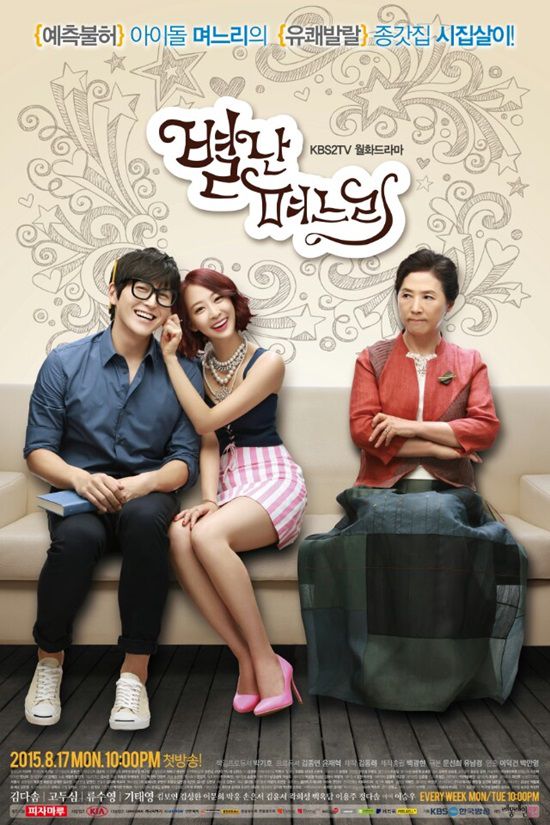 Plot: In-Young is an idol from a popular 4 member girl group, Ruby, but now, she isn’t very popular anymore. To regain her popularity, In-Young appears on the TV show “Experience of Daughter-in-Law From The Eldest Son’s Family.” While filming for the TV show, she meets her scripted mother-in-law Yang Choon-Ja and falls in love with her pretend husband.

Review: For my March throwback drama, i wanted to watch something about a family so i decided to take a chance on this show. and I can’t believe i didn’t watch this sooner! I loved the show!! I love In Young – she is such a breath of fresh air with her bubbly personality and honest talk. I also like Myung Seok – he is such a cute nerd. I haven’t watch Ryu Soo Young in such a long time but he still hasn’t changed since his 18vs29 days!

I admit, there are a lot of plotholes and discrimination and unnecessary drama in the series, but the overall feel good tone of the show is good enough for me to keep watching and rooting for the characters.

Some main comments on the show are:

In Young is such a good daughter in law. despite how mean the mother in law was, instead of fighting back like the other daughter in law Se-mi, she just kept it in stride and worked hard to meet her expectations. in the end though i was thinking why that is not enough for the mother in law – she was young, bubbly, works hard, loves Myung Suk, good daughter in law – is it because she’s not educated for him? also, she also has a good taste bud and seems to be able to distinguish tastes and cook really well. i actually thought she will end up retiring from being an idol and helping the mother in law ran the family business (i mean who else would right?) but she ended up studying in university while being a topstar – all the while trying to be the daughter in law that the mom can accept.

The forced separation between Myung Suk and In Young starting from episode 10 was stupid. I dont understand why they have to break up just because one person is going abroad. they have only met each other for a few months. they can continue being in a LDR – that way, they can learn more about each other in the next 5 years – and i can’t believe that Myung Suk didn’t even get a vacation to go home and see her. the ending where Myung Suk is the visiting professor to where In Young was studying was a bit cheesy but it also provided the closure and happy ever after.

The mother in law’s character is a complex one. When she was being mean to the ladies, i disliked her, but then if you think about it, that’s her role as a mother – protecting her family. the other daughter in law really needed to be disciplined as she was such a b*tch (more on her below) but it was not right for the mother in law to keep scolding her when the real problem is her own son who is jobless. i also felt bad for her when her father in law got a new wife – who is actually her friend and the father in law just expected her to agree and serve her. that was such an assh*le move!! i could understand why the mother in law acted that way to the new wife – and it does not help that the new wife was so bad – and i dont buy her excuse in the end that she was that way because she wanted her to approve of her or something. she didn’t even properly apologize to Choon Ja. as for Choon Ja’s husband – he also seemed to be a no good husband, who did nothing but hang out with his friends and so weak that instead of defending his wife, he always accedes to his father’s rules and wishes.

In fact, except for Myung Suk, the men in the family were useless and awful. The father in law, who did nothing but take a new wife, expect everyone to just accept her and make demands for the daughter in law to serve the new wife without considering her feelings, to Choon Ja’s husband who was useless. the other son Dong seok was also jobless and hanged around the house doing nothing. during the cooking competition, i actually thought this is it, the son will have a job in the family business, helping his mom. but no, during the cooking competition, In Young came and left. in the end, he became In Young’s manager – another questionable job.

As for the Dong Seok and the wife Se-mi, ugh i disliked Se-mi. I have nothing against working moms, in fact i am impressed how they are able to juggle work and family obligations, but in this case, Se-mi was too ambitious and cocky. it was just right when the mother in law scolded her, if she can’t even handle her family and take care of her son, how will she be able to handle her students? i’m glad she got scammed – definitely made her realize what a fool she had been. in the end, i like how the mother in law finally gave in and helped her put up her dream school. what i hoped they showed was Se-mi still fulfilling her role as a mother and good wife to her husband.

we now move to the daughter, Young A, she is another favorite character – she is smart, sweet, helpful but she married into a bad family!! i didn’t like her husband Joon-so, who happens to own the company label In Young is in. As a company president, Joon-so doesn’t seem to know how to handle his actors/actresses. I dont think he treated In young that well – and thought of her as a commodity instead of a person. Many times i thought why can’t In young just leave his company to move to a new one – i was right as in the end, she decided to leave and put up her own together with Dong seok as her manager. Joon so as a husband was worse – totally disregards Young ah, is such a momma’s boy – wow I’m surprised Young A was able to take it in for years without complaining. Finally she had the nerve to get a divorce and break away – but also a good thing Joon so finally woke up and chose her instead of his mom.

Joon soo’s mom – argh!!!! probably the worst character in the show. She has done nothing good but lie and manipulate people while acting fake nice.

Overall, i loved the show – it was fast paced (12 episodes only) and each of the main characters grew up and got their happy ever afters.

Cha Eun Woo looks good in anything but I particularly loved seeing him in brown, beige, tan and white. Some of his fashion style in True Beauty.
True Beauty (2021)
Awaken (2021)
I dont mind a clingy boyfriend as long as he's #ChaEunWoo
Squirrel or cat 🥰
Happy birthday #Jisung 🥳